Wonderful Evening to Celebrate GCSE Success for Class of 2017 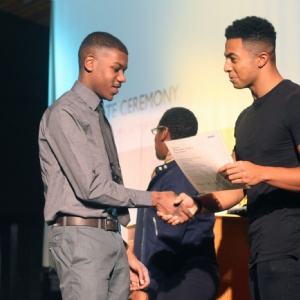 On Wednesday 29 November the Acadmey hosted a fantastic celebration event to mark the many successes of the Class of 2017.

A great turn out of students, staff and parents were treated to a wonderful evening.  We were delighted to be joined by dignitaries Local Mayor Marsie Skeet and Cllr Agatha Mary Akyigyina OBE and Andy Yarrow, CEO of CST.

As part of the award ceremony, which included prizes fror best Academic performace and also most progress, students were treated to a talk from guest of honour, Tyler West. Born and bred in South London, Tyler West is a versatile talent with many strings to his bow, from featuring as a guest presenter, to hosting his own show on national television, he is a young presenter who has rocketed in the TV and online industries.  Tyler was a wondeful guest and spent lots of time talking with students and parents alike and we thank him for his time.

On completion of the formal ceremony and presentation of GCSE certificates, guests were able to enjoy a buffet. This presented a great opportunity for everyone to catch up with old friends and teachers.

The evening itself was largely student led, with our Head Girl and Boy, Georgia and Emmanuel comparing the event brillaintly.  Support was provided by our superb student ambassador team, led by Miss Carter, all of whom we thank for their efforts.  It was a great success on many levels and we look forward to hearing of the many future successes of the Class of 2017!